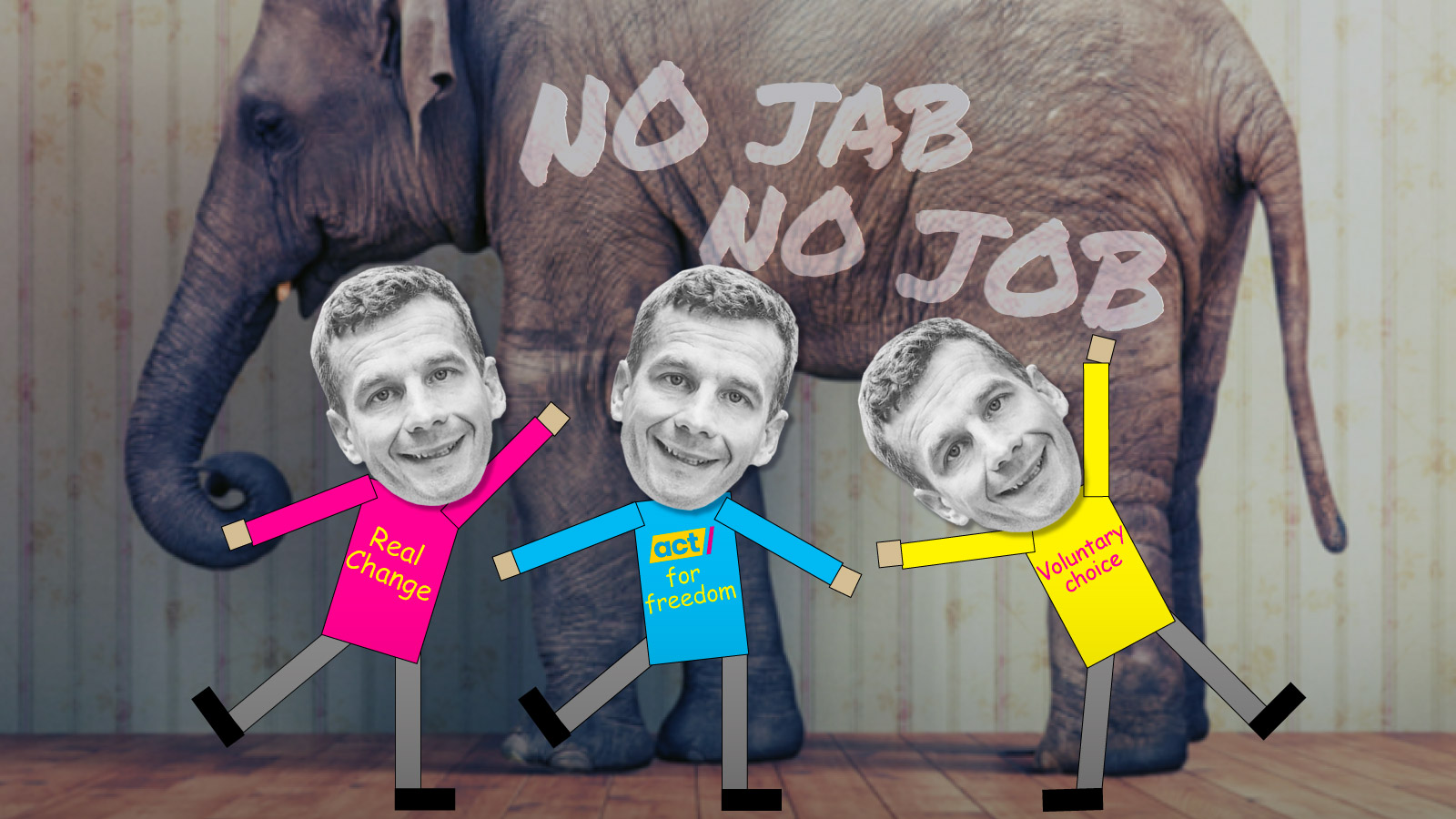 Act (bi-curiously now a noun and a verb since the party has moved away from the upper-case acronym for the Association of Consumers & Taxpayers) is on the road with their three conferences – the first held in Wellington, followed by Christchurch and Auckland.

This is the first time the party’s held its conference outside of the City of Sails, reflecting organisers’ euphoria that their boat is on a rising tide now that National has checked out as the party of Opposition.

We’ll see where the chips fall in another 15 months or so, but party leader David Seymour thinks the time is now right for him to verbally challenge the Labour Government’s Covid response. He proudly announced that Act will push for a Royal Commission of Inquiry into the government’s Covid decisions.

Here’s a message to David Seymour.

Where were you when border workers, teachers, nurses and hospo workers, et al were being mandated out of their jobs? Cheering on the government, that’s where! There was no opposition from Act.

Don’t forget you signed a written agreement with the Prime Minister that no elected MP would meet with protesters at Parliament in February. What made you sign that, David? Why wasn’t your response, “Prime Minister, what’s happening on the lawn of Parliament is your problem and Act is not going to sign your stupid agreement!”?

Oh you did try to meet with ‘protest leaders’ but it wasn’t to hear their concerns, it was only to try to get them to remove the vehicles from the streets surrounding Parliament. You wanted to be the guy who saved the day for Wellington! Pure politics.

You told intermediaries that discussions could only be had if everyone packed up, went home, and suffered the loss of their jobs, businesses, family, homes, and social lives quietly out of the sight of the ruling elite and the indoctrinated Wellington public servants.

Resistance Kiwi is ambivalent about an inquiry. The damage is done and any acknowledgement of mismanagement or outright wrongdoing now, will not absolve those responsible nor help those affected or justify the segregation.

The only meaningful action would be a public apology to all New Zealanders from those who were supposedly leading us – the Labour Party apparatchiks to the leaders of the Opposition parties – and the resignation of all those who actively breached our rights or advocated for measures that did so, as well as engaged in the coercion and bullying of the past two years.

David, it’s not only Labour that has ruined our beautiful nation, but your failure to stand up for people’s rights and freedoms, apparently something that your party supposedly stands for.

You ignore the elephant in the room and dance around espousing the ‘Real Change’ that Act will bring and how you will reverse all the slights this government has made on our democracy. But you conveniently avoid the most obvious affront to an individual’s bodily autonomy made in recent times; one that is central to a free humanity. You’re much like the husband who brings his wife flowers while knowing he’s actually cheating on her.

We are not falling for the flowers. An inquiry is entirely just a sop to your conscience and the paper it would be printed on would be better used in the toilet for the next manufactured emergency.

That’s how Resistance Kiwi feels about David Seymour’s promises. Let us know what you think below!