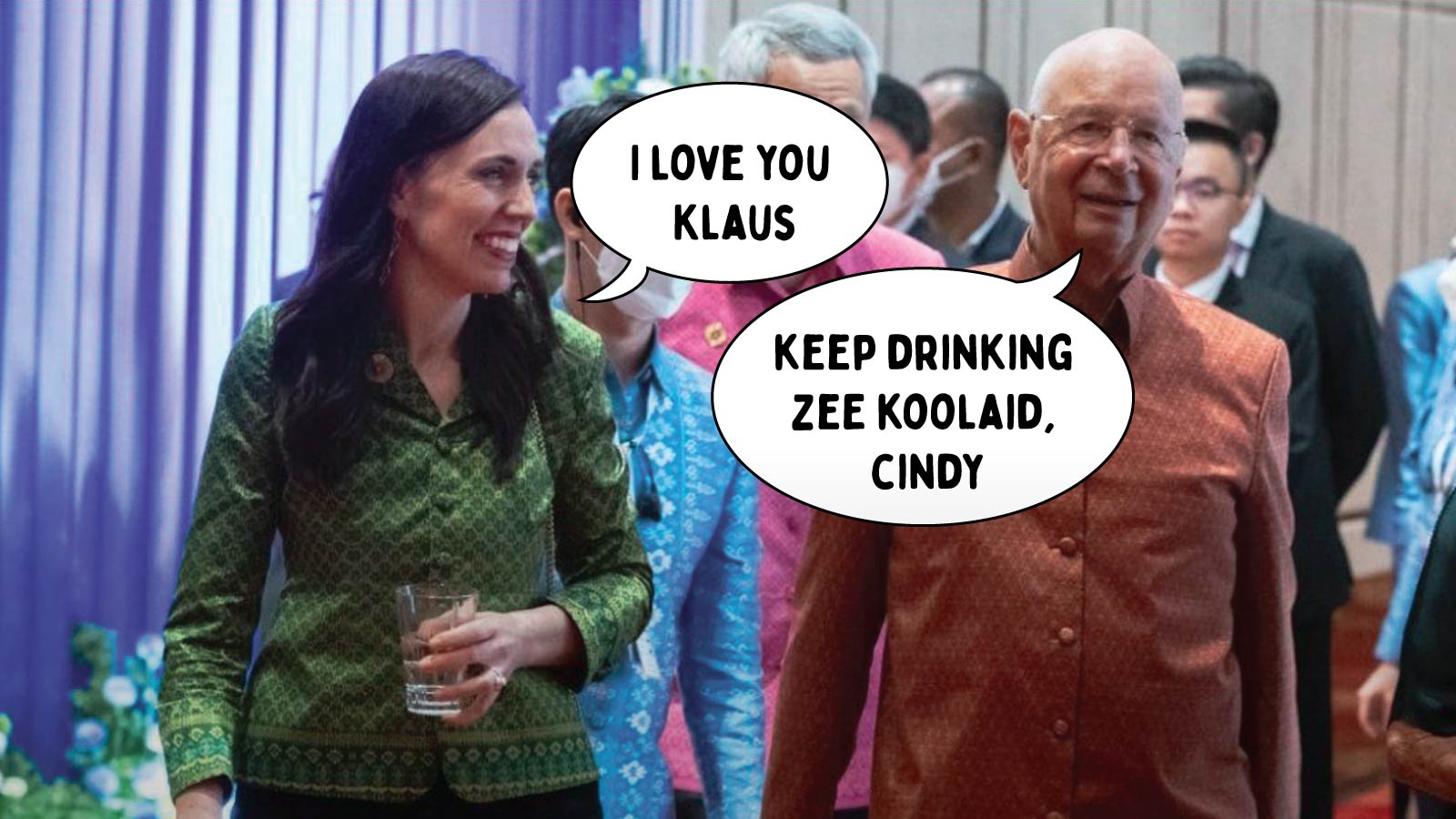 Can the influence of the World Economic Forum (WEF) and it’s executive chairman Klaus Schwab on the world’s Western governments still be considered a conspiracy theory?

Despite it’s plan to create the world in Klaus Schwab’s image, the World Economic Forum is considered by many to be a harmless organisation that has the world’s best interests at heart. Just watch their slick videos on LinkedIn and you’d naturally believe they’re just out to make the world a better place. It’s a fair enough assumption.

To achieve this, the WEF brings together a “dynamic community of exceptional people with the vison, courage and influence to drive positive change in the world.” Our own Prime Minister Jacinda Ardern is an alumni of that group of Young Global Leaders, like her good friend Justin Trudeau, the Canadian Prime Minister. And the new UK Prime Minister Rishi Sunak; the President of Argentina, Alberto Ángel Fernández, and so on. The WEF Young Global Leaders programme has a growing membership of more than 1,400 members and alumni of 12 nationalities, including civic and business “innovators”, entrepreneurs, technology pioneers, educators, activists, artists, journalists and more, the organisation’s website says.

Schwab himself has stated that the WEF penetrates ruling cabinets of governments around the Western world, and celebrates that almost half of Justine Trudeau’s Cabinet has been through the WEF’s Young Global Leaders’ programme.

The process of lobbying governments is nothing new. It’s usually undertaken at an industry or non-governmental organisation (NGO) level to get some policy through that benefits that company, industry or agenda. It’s the way the world works.

The World Economic Forum has been successful in achieving influence over actual governments and world leaders, and that influence has expanded 100-fold since the advent of the Internet and the rise of social media. Since the early 2000s, the WEF has been able to wield considerable power and it does. It’s annual winter conferences in the rich Swiss mountain retreat of Davos (Schwab’s own Berchtesgaden) attracts the likes of UN representatives, wealthy Silicon Valley investors, the founders of Facebook and Twitter, US and European foundations, companies looking for redemption and marketing ideas – all flying in on their private jets.

And as they all fly in, so does the money, for the WEF to continue and expand its programmes.

The closeness and ongoing influence that Schwab has over Jacinda Ardern can be seen through Official Information Act releases to Auckland political commentator Cam Slater and published on the website BFD. The documents reveal sporadic and friendly communication between Schwab and Ardern, who responds favourably to an email from Schwab, reiterating that New Zealand is committed to working with WEF’s so-called Centre for the Fourth Industrial Revolution (See image). 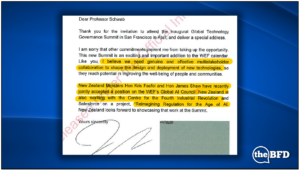 In 2020, Ardern’s government agreed to be the guinea pig for developing WEF policy around the implementation of Artificial Intelligence, as can be seen in this document: Reimagining Regulation for the Age of AI.

The thing is, groups like the WEF and its crazy notions of “de-growing the planet” are not new. There’s been groups like the Council on Foreign Relations, a US think tank specialising in foreign policy and international relations and which celebrated its 100th anniversary in 2021 and which was seen as influencing global direction, towards the American way of life.

The Club of Rome was founded in 1968 and still exists today to push its “no growth” agenda to save the planet.

Then there was the Trilateral Commission founded in 1973 by David Rockefeller to promote trade and discussed issues such as a single world government. It didn’t succeed. Or did it?

As the witty and learned Andy Kessler points out in a recent article in the Wall Street Journal (30 October 2022, subscription required), the modern world is “constantly subjected to crackpot movements that eventually fail, but not before causing serious damage”.

The de-growth agenda promoted by the WEF is no different to its predecessors like the Club of Rome. As Kessler notes: “In the 1970s, the Club of Rome insisted that for the world to be ecologically sound, we needed a ‘no-growth economy.’ This was as dumb as the debunked Malthus theory that population growth would outstrip food. The disgraced Club of Rome thankfully went dormant. But it’s baaaack.” (Read more about Malthus theory. Check out Matthew Ehret’s article here on Unlimited Hangout.)

Yes, it’s back, like Jack Nicholson’s character in The Shining.

The de-growth agenda to put well-being ahead of profits is a central tenet to the WEF, which, as Kessler points out, is weird because “mostly growing global companies pay the WEF’s bills – tributes to the woke dons. The WEF’s website is filled with scholar-infested nonsense including a video asking, ‘What would a post-economic-growth world look like?’”

We can already tell you: it wouldn’t be pretty.

“Like Manta rays that must keep swimming or die (sharks too), societies that don’t grow eventually devolve into oppression, chaos, anarchy and then ruin. The Roman Empire. The Soviet Union. Venezuela. De-growth is living with less. Capitalism’s productivity is doing more with less. Big difference,” says Kessler.

“Growth is fuel. Someone tell the World Economic Forum that without growth, life would emulate lockdowns awaiting orders from our leaders. Hey, maybe that’s their goal.”

And that’s what this WEF influence is doing to the New Zealand economy. The WEF is a climate change proponent and advocate of “zero carbon”. The WEF has got its hooks into our Prime Minister, whose thinking has already been shaped by the International Union of Socialist Youth and who says climate change is her generation’s nuclear-free moment.

Remember, New Zealand is also the guinea-pig for “regulating” artificial intelligence and its use on the population.

Ardern’s Government’s latest climate change proposals to cut farm emissions leading to a more than 20 percent cut in production for our largest export earner, the agricultural sector, will see our economy stagnate. Not to mention the cost of food. This Labour Party and their political partners, the Green Party and Māori Party, want to limit growth in order to reduce this country’s carbon emissions as their way of saving the planet.

No growth is deadly, so why do so many push it? “Joseph Stalin called his naïve allies ‘useful idiots’. The no-growth movement has more than its share of dunces pitching policies to kill economic growth,” he adds.

“No-Grows are the ones shouting ‘sustainability’. When you hear ‘net zero’ it screams no growth. Let’s drive energy prices high enough to limit growth (hey, it worked!). Please ignore that it enriches makers of not-yet-ready green solutions. Climate change is another No-Grow favorite — it’s an ‘existential threat’! Solutions aren’t about adapting but instead population-limiting economic brakes.”

In a New Zealand context, the No-Grows are the Labour Party and Green Party policy writers and MPs who want to “redistribute” capital and give it to a protected class, those who can’t work, won’t work and want the State to provide.

“Social-justice warriors hide behind squishy sentiments like intersectionality, critical race theory and inclusion. But they’re definitely No-Grows because they seek to end meritocracy, the incentive system for growth and progress.”

Read closely the United Nations Sustainable Development Goals. Over half of them will lead to no growth, which would require UN technocrats to rescue everyone. Kessler adds, “Sad, because markets work and reach far and wide. Prices automatically allow billions of people to allocate resources, removing the need for biased experts.”

“Growth is fuel. Someone tell the World Economic Forum that without growth, life would emulate lockdowns awaiting orders from our leaders. Hey, maybe that’s their goal,” he concludes.

If the WEF and its influence on world governments is “just another conspiracy theory”, it’s one that has reached the US mainstream media into the Wall Street Journal. Nothing could be more mainstream than that. Kiwi journalists remain oblivious (yes, that’s the word) to the truth, just look at journalist and shock jock radio announcer Sean Plunket’s response to Cam Slater’s article in the BFD.

You make your own minds up. 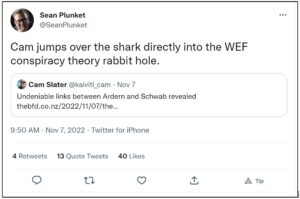